Secure your spot and get our Parent’s Guide: Discipline X Punishment.

By opting into the web form above you are providing consent for Leaders for Life Martial Arts to send you periodic text messages. Standard rates may apply. You can reply HELP at anytime or learn more. You may opt-out anytime by replying STOP.
Schedule Your 1st free lesson

Secure your spot and get our Parent’s Guide: Discipline X Punishment.

By opting into the web form above you are providing consent for Leaders for Life Martial Arts to send you periodic text messages. Standard rates may apply. You can reply HELP at anytime or learn more. You may opt-out anytime by replying STOP.

This place is amazing beyond words and the people are the most upstanding, generous, honest and great teachers! My son begs to go everyday! I was impressed from day one and it only gets better!!

This place is great! Not only is the curriculum great, but the staff is great as well. It is convenient for after school care and I feel like my kids are doing something they like and actually learning something rather than watching movies and coloring which is what they did at past day cares. You can tell the staff have a passion for their job and care about your child's success. I could not have made a better decision for after school care for my kids!

After spending three years forcing our children to go to karate classes, we decided to change schools. We have been at ATA kemah for almost three months. I was amazed that my children are wanting to be in every extra class, not wanting to leave, and having the time of their lives. Their technique is improving and their skills are being challenged. We really love the small classes, attention to detail, the opportunity to spar at competitions, and the teachers desire to help every student learn. Did I mention parents can take class too as part of the family plan they offer. Kickboxing is so much fun! Come join the fun and learning.

A Martial Arts School that is so much more. A great group of Instructors that will challenge you to meet your goals, for adults, children,and parents. Creating Tomorrows Leaders Today.

Leaders for Life really has changed my life. After I saw a difference in my sister, I was eager to join the team. My sister’s overall confidence, self-motivation, self-discipline and leadership skills have improved significantly. She’s on her way to being a wonderful leader now and she couldn’t have done it without Leaders for Life. They really do create leaders from the inside out, and it’s not just for kids, but adults too. Every child and adult can and will live a better life once they become part of the Leaders for Life family. Thank you so much team L4L!!! 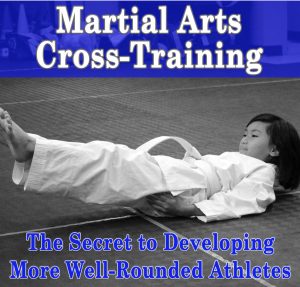 An athlete is defined by Merriam-Webster as “a person who is trained or skilled in exercises, sports, or games requiring physical strength, agility, or stamina.” Athletes in specific sports train to be at the top of their game, but how much better of an athlete would they be if they had a well-rounded cross training program?
For years, martial arts has been viewed more as an “art” than a “sport.” And while, there is much beauty in it, there is also a lot of blood, sweat, and tears that go into the training. However, that is the part that the general population does not see. Training in any form of martial arts is rigorous and is, by far, one of the most versatile. Those that have studied any form of martial arts knows what is require of them in training in order to achieve higher levels of mind and body fitness.
Martial arts creates well-round athletes. This may come to a surprise to some, but not to those that train in it. From strength and speed training to mental acuity and confidence to flexibility and balance, martial arts covers it all. Using martial arts as a training foundation for athlete development helps people in all sports become better physically and mentally equipped, skills that will give them an edge in their own sport.
This idea of martial arts cross-training, however, is not new. It’s just not something that is in the forefront when we hear of sports training. There are many professional athletes across the country and across various sports that train in some form of martial arts. They’ve discovered the numerous benefits that martial arts provides them in their overall sports performance.
According to the LA Times, Clay Matthews, a linebacker for the LA Rams, said the players wanted to condition their bodies to be able to stay healthy and to train their minds to be stronger than their opponents’. Phil Mickelson, a professional golf player, says that his training in martial arts has helped him control his body and focus better on his game.
The multi-dimensional way of training that martial arts provides can assist athletes in any sport. And what’s even better is that martial arts is not a seasonal sport so the consistency in the training has a huge impact on keeping athletes fit in the off season as well.
When athletes start this type of cross-training as children, the benefits have even more of an impact. Since our program was created as a whole child focused approach by using martial arts as the vehicle to teach, child athletes benefit even more in this system through the method of four-dimensional teaching. They learn how to keep their bodies healthy and it teaches them different ways to train so they are at peak performance level. It helps them learn to work as a team and support others. It teaches them to stay focused and remain calm under pressure, and it helps them learn more quickly and remember things easier.
As sports training continues to evolve and focus on the whole athlete, more people will begin turning to martial arts as a method of cross training. Knowledge is power and utilizing martial arts training as a foundation to athletic development will be the method of choice to keep athletes strong mentally and physically during the on and off seasons.